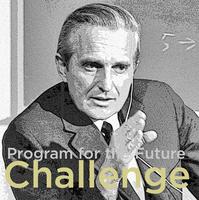 A recipient of the Turing Award, the National Medal of Technology and a couple of dozen other highest honors, Douglas Engelbart (1925-2013) was recognized with some of the highest honors an inventor could receive. As the progenitor of word processing, outliners, windows, teleconferencing, intranets, bitmapped screens, hypertext, hypermedia, groupware, wikiness, and email... Doug saw into the future and realized the way computers could be created and used for the betterment of humanity.

Yet – even though his vision and accomplishments prompted Alan Kay to ask “What will the Silicon Valley do when they run out of Doug’s ideas?” – Doug felt as if the world had missed the point. When asked by Sam Hahn in 2010 what percentage of his vision had been realized in practice, Doug answered: “3.6%”.

If so: what is that elusive “96.4%”? The following quote from Doug may provide a clue:

“Many years ago, I dreamed that people were talking seriously about the potential of harnessing a technological and social nervous system to improve the IQ of our various organizations. What if, suddenly, in an evolutionary sense, we evolved a super new nervous system to upgrade our collective social organisms? Then I dreamed that we got strategic and began to form cooperative alliances of organizations, employing advanced networked computer tools and methods to develop and apply new collective knowledge.”

With this in mind, we are launching the Program for the Future Challenge (#pftfc) at a workshop at Google’s headquarters in Mountain View on December 9, 2013 inspired by the questions:

What is the remaining “96.4%”? And how might humanity bring it to life?

The aim is active and ambitious: the PFTF Challenge will focus on hosting a set of demos to be presented in 2018 on the 50th anniversary of Engelbart’s famous 1968 demo with the aim of shaping the future of humanity and technology in the extraordinary way that The Mother of All Demos has shaped the last 50 years. The Challenge is envisioned as a collaborative ‘uncompetition’, in which the demo project teams augment each other’s progress by sharing insights and learning from one another.

This short MIT-produced video and interview with Tim van Gelder illustrate why the study of Doug Engelbart’s example, vision and legacy is such an apt way to invite a new generation to venture together collaboratively, imaginatively, creatively, and iteratively in pursuit of a better future for humanity.

Note: The day's event is scheduled to finish in time to allow participants to attend the beautiful celebration of Doug's life and work being held in the evening at the Computer History Museum.